Announcing Project Tycho™, a web site which provides open access to newly digitized and integrated data from the entire 125 years history of United States weekly nationally notifiable disease surveillance data since 1888. Read all about it:

The goal of Project Tycho™ is to aid scientists and public health officials in the eradication of deadly and devastating diseases. A recent NEJM article, documents how the Project Tycho team digitized and made public all weekly surveillance reports of nationally notifiable diseases for U.S. cities and states published between 1888 and 2011. The project derived a quantitative history of disease reduction in the United States over the past century, focusing particularly on the effect of vaccination programs.
Reference
van Panhuis WG, Grefenstette J, Jung SY, Chok NS, Cross A, Eng H, et al. Contagious diseases in the United States from 1888 to the present.N.Engl.J.Med. 2013 Nov 28;369(22):2152-2158. 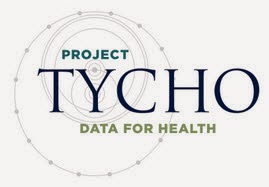 In the United States, cases of contagious diseases have been reported at weekly intervals to health authorities for more than a century, but these data have not been publicly available in a computable format, so their use and value have been limited. The University of Pittsburgh has released a collection of surveillance reports about diseases in the United States going back 125 years. "The researchers obtained all weekly notifiable disease surveillance tables published between 1888 and 2013 - approximately 6,500 tables - in various historical reports, including the U.S. Centers for Disease Control and Prevention's Morbidity and Mortality Weekly Report. These tables were available only in paper format or as PDF scans in online repositories that could not be read by computers and had to be hand-entered. With an estimated 200 million keystrokes, the data - including death counts, reporting locations, time periods and diseases - were digitized. A total of 56 diseases were reported for at least some period of time during the 125-year time span, with no single disease reported continuously."